Girls Soccer Team progresses from 2018, hopes to continue into 2020 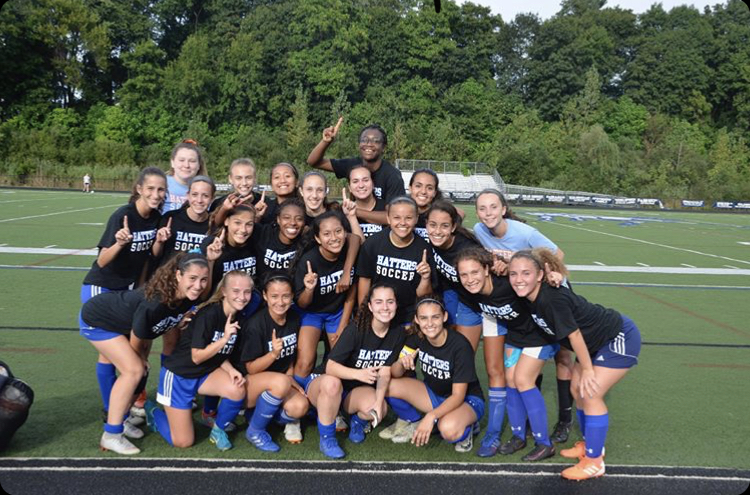 The Girls Soccer team poses for a picture at Immaculate High School.

The Danbury Girls Soccer team, led by Coach Jessica Halas, and captains Olivia DeMoura, Victoria Catarino, and Jessica Queiroz, finished their 2019 season with a record of 6-8-2. They beat teams such as Westhill, Fairfield Ludlowe, and Stamford, while losing to FCIAC powerhouses such as Ridgefield, Staples, and St. Joseph.

They failed to qualify for the FCIACs, but they improved on their record from last year (5-11-0) and qualified as the 25th seed in the Class LL State Tournament. They faced the 8th seed  Cheshire Rams in the first round on Tuesday Nov. 12, where they put up a strong fight, but ultimately fell 2-1.

Although they fell short of the main goal of winning the State Tournament, Juniors,  Avery Amalfitano, Lexie Silva, and Jenna Ferrandino reflected fondly on their 2019 journey.

Playing Soccer affected all three of the girls high school experiences. Amalfitano said, “It helped [her] create forever friendships with [her] teammates, and allow[ed] [her] to take a break from school and do something else with [her] life”.

Silva agreed that soccer was beneficial to her enjoyment of high school. “Although [they] see each other in school, being friends is different from teammates. It’s a closer bond since [they] hang out after school for practices and games.”

Ferrandino also thought that soccer affected her positively in high school, as “Being part of the program for three years now has helped [her] grow as an individual, by helping [her]build leadership skills, along with keeping [her] in shape by playing at such a high level.”

Amalfitano, Ferrandino, and Silva all plan to return to the pitch next year as they all have had great experiences in the past three years, and it is a great way to make friends and take a break from the rigorous school year. In addition, they look to use this season as a stepping stone towards a successful senior season.