DHS, Danbury Police, and city representatives work together to resolve altercations in school 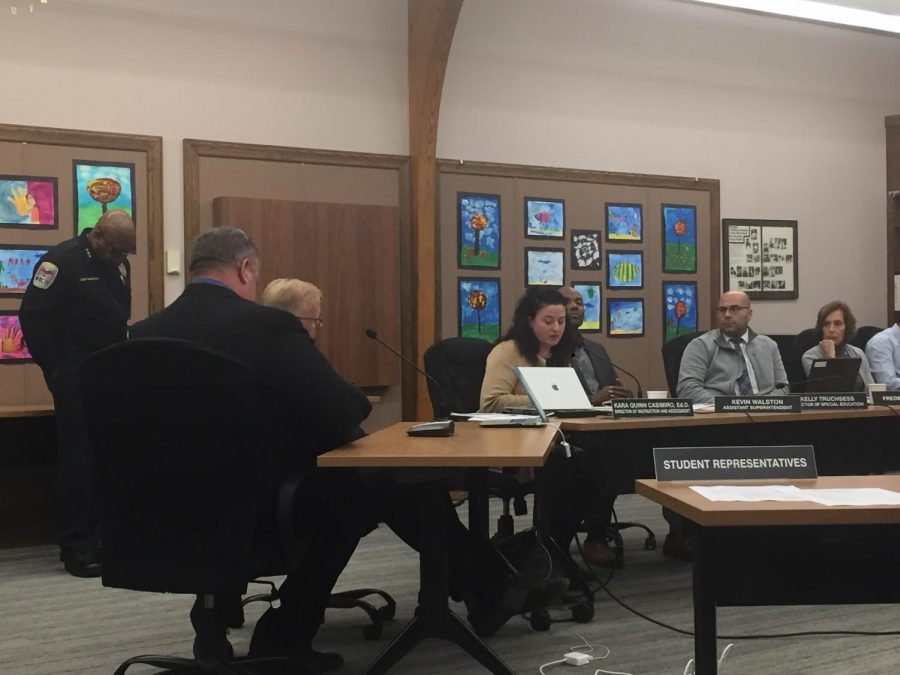 Mayor Mark Boughton and Principal Dan Donovan sit in front of the Danbury Board of Education on Nov. 26 to address conflicts in the past week.

After the evaluation NEASC gave last Wednesday, Nov. 20, which described DHS as an “overall positive and supportive environment to be in,” DHS should have been elated. Yet, the rumors, physical altercations, and threats left the school anxious, tense, and even scared.

“It seems like everywhere I turn, there’s a fight,” Sophomore Louis Alfidi said during the heat of last week. “It’s really impacting my education. One fight blocked me from getting to class on time.”

The administration claimed that the chaos at DHS of the past week was a result of “three separate physical incidents” from Wednesday to Friday that combined into a perfect storm.

“This is not the school [we] want,” Principal Dan Donovan wrote in a mass-sent email responding to the events. One of DHS’s belief statements is to provide a “safe and orderly learning environment,” a goal that was clearly disturbed by the chain of fights and threats from last week.

The school has been working with the Danbury Police Department to retain their ideal learning environment. “We cannot let two small groups of students disrupt the education of 3300 students,” Donovan said to justify his actions. Following the events of last week, the police investigations were able to determine the instigators of the fights, and suspension, expulsions, or arrests were then made accordingly.

After students went home for the weekend on Friday, Nov. 22, rumors of a potential shooting at DHS on Wednesday, Nov. 27 spread rapidly on social media. The police were able to determine on Monday that the threat was not credible and that it was safe to come to DHS. Despite these claims, DHS had noticeably more absences than usual on the 27th.

The tense DHS environment within the past week is a rare occurrence, and Mayor Mark Boughton claims that much of the anxiety can be attributed to the spread of rumors and the misuse of social media.

“Those who are involved in the altercations use social media to continue instigating conflict. Those who aren’t involved use social media to spread rumors and exaggerate what occurred,” said Boughton in an address to the Danbury Board of Education yesterday, Nov. 28. “Some students claimed that there were five guns confiscated. There were zero guns present on campus.”

“Some students claimed that there were ten or eighteen fights within the past week,” Donovan pitched in. “In actuality, there were seven confirmed fights on campus within the past two weeks, five of which are contributed to an ongoing issue in the community that has been occurring since last June.”

Despite all of the rumors, DHS and the Danbury Police Department continue to take every threat seriously. “We are taking adding police officers to the perimeter, taking action to address the fighting, and investigating to get to the root cause and create long-term solutions,” said the Chief of Police Patrick Ridenhour. Currently, the DHS campus has five police officers in addition to the seven safety advocates and wide range of staff protecting the student body.

Numerous solutions have been proposed by staff, students, officers, and the Board of Education in response to the past week’s incidents. Superintendent Dr. Sal Pascarelli is creating a task force with Boughton, parents, Ridenhour, Eidenstreet and housing units (where many of the incidents stemmed from), the NAACP, and the Hispanic community to resolve conflicts in neighborhoods between families and prevent those conflicts from spilling over into schools.

Senior Elizabeth Antedominco proposed helping the students involved with a “therapeutic approach” rather than a punishing one.

History Teacher Julian Shafer claims that “school culture in dealing with conflict is often to throw those students away, which allows their violent patterns to replicate themselves.” By throwing away, Shafer is referring to the repetition of detentions and suspensions to student offenders. Shafer instead proposed that “having people the students trust mediate their conflict, starting with what happened” would be a valuable resolution instead.

Safety Officer Robert Nelson, however, ideally laid out how students should respond to violence in the future. “The best thing to do is to speak up. It goes without saying: if you see something, say something – especially to the administration,” Nelson said.

With the extra safety precautions and the addressing of the circumstances in and out of classrooms, it seems DHS is finally returning to its normal state of affairs. NEASC believed they witnessed successful students and adults in a supportive environment, and many members of the DHS body believe the same. The events in the past week should be used as learning opportunities for the school and its students to prevent and mediate conflict.