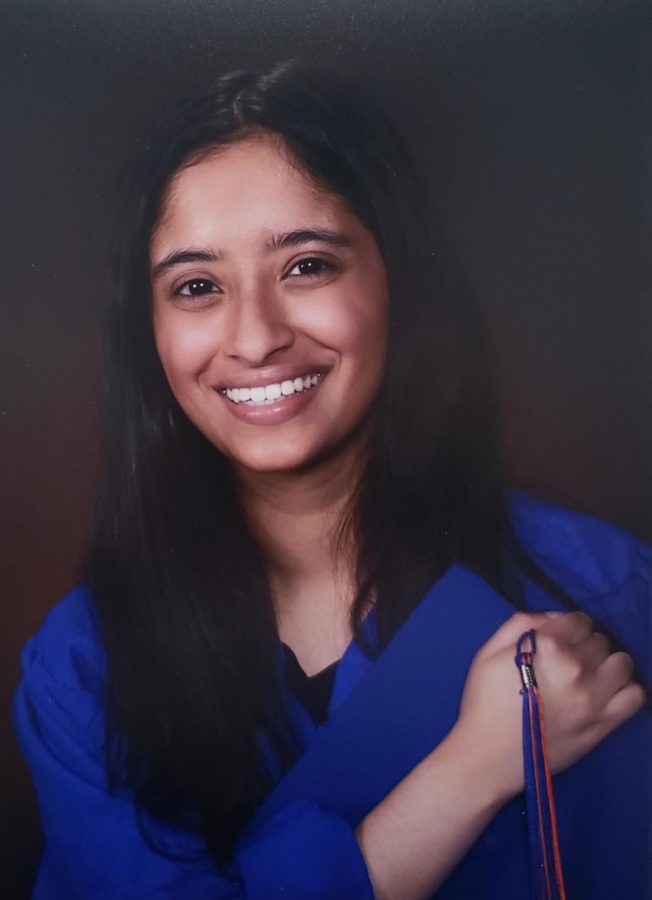 With a GPA of 4.8909 and 10 AP classes under her belt, it would be easy to define Senior Valedictorian Faith Thomas as a number: her test scores, her GPA, or her number one class rank.

Yet, it’s also obvious to anyone around Thomas that the faith-devoted (pun intended) scholar is more than just her numerical achievements. Her character – which consists of a perfect culmination of being passionate, kind, and determined – overshadows any label that could be thrown on her.

Thomas’s enthusiasm and dedication to one of her favorite school subjects – mathematics – is a clear indicator of her passionate nature. Thai Nguyen, Thomas’s AP Calculus BC teacher, described her as an “exceptional student in many aspects” who stood out in his class due to her “outstanding effort and deep analysis of every problem she was given.”

Beyond her phenomenal performance in her mathematics classes (even going so far as to begin taking high-school-level math courses in the eighth grade), Thomas also assumed leadership positions within extracurriculars of her same favorite subject. While Thomas participated in many merit-worthy activities such as the National Science, Music, History, and (regular) Honor Society, her management of the National Math Honor Society and the DHS Math Team are perhaps her most notable accomplishments at DHS.

Without Thomas’s contributions, the DHS Math Team would not have had their meets “run smoothly,” as Nguyen put it. Thomas has been president of the Math Team for two years and with her efforts, has been able to successfully lead the team to victory in many competitions as a member of the front-running A-Team. Without Thomas’s contributions and her one-year presidency, the National Math Honor Society would not have accumulated the massive membership it had for the 2019 to 2020 chapter.

It is evident that her intelligence is the foundation for much of her best attributes: leadership, diligence, and kindness. “She’s so sweet and always goes out of he way to help other people,” Thomas’s friend Senior Sarah Johnson explained. “Especially when it comes to Calculus, I felt like I could always go to her and she’d be able to perfectly explain the concept to me.”

Thomas’s interactions with her friends are only some of many instances where she exemplified the Christian saying, “Thou shalt love thy neighbor as thy self.” Her devotion to her faith has led her to volunteer at nursing homes, coordinate the Zion Pentecostal Church’s global missions, and continue to spread the positive messages she found in her religion.

Yet, Thomas is also respectful to the diverse range of people surrounding her and their own perspectives and ideologies, regardless of her own thoughts and beliefs. “The opportunity to meet new people and reach outside of your comfort zone is incredible and rare to find,” Thomas explained, so she tried to take advantage of it every day she could at DHS.

When it comes to how Thomas achieved her class rank and notable distinction as first in her class, it can all be chalked up to “prayer…and hard work.” Thomas would put hours of studying in before every test, and will forever be thankful of the “work and effort [she] put in over the four years.” It isn’t a surprise that with her efforts, Thomas is able to also celebrate being an AP Scholar, a National History Day award winner, and a Hatters’ Hero.

“Even though students don’t get recognized enough for academics and merit at school, I still think it is something important to applaud and celebrate,” Thomas explained. She only hopes that her achievements can pave the way for greater academic recognition at DHS.

With graduation on the horizon, Thomas’s hard work, kindness, and passion has led her to find her calling in pursuing a Biological Sciences major at the University of Connecticut. In her words, “I want my future to be productive, and I want to help and reach out to other people.”

With the journey that Thomas has experienced, one thing’s for certain: Thomas is going to change the world for the better of those around her.