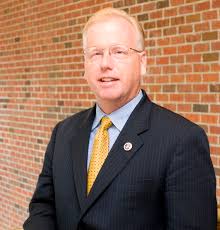 The longest-serving mayor in Danbury's history is ready to move on as the head of the Department of Revenue Services.

After ten consecutive terms of service, Mark Boughton – civil servant and a public lover of The Office – has stepped down as the mayor of Danbury, turning over a new leaf as Connecticut’s Tax Commissioner.

His replacement, former City Council Leader Joe Cavo, was sworn in on December 16th, describing the new position as “one of the most tremendous honors of my lifetime.” Meanwhile, Boughton began serving as commissioner on December 18th, leaving a legacy behind in Hat City.

Boughton has accumulated many titles throughout his time in Danbury. He’s known as a war veteran as he served in the United States Army Reserves where he became a sergeant. He’s known as a fellow educator as he formerly taught social studies at Danbury High School. He’s a brain tumor survivor, an internet troll (who can forget his snow day tweets and interaction with John Oliver), and a figure who will be missed.

“My family has been here since the early 1700s,” Boughton said, accentuating his Danburian roots. “Every day, [you find that] there’s something new every day in this city. That’s why we’re the 11th most diverse city in the United States of America. That’s why Danbury is such a great place to live; you can’t compete!”

The choice to leave Danbury was difficult, but the opportunity it presented was too compelling to not take. “A lot of people don’t realize it, but the conclusion of November’s election cycle is the beginning of a new mayoral election which occurs every two years,” Boughton explained. “So I had to make a decision. Am I going to run for an eleventh term? Then the governor called very out of the blue. I had just decided I was not going to run again and was questioning what my next act was going to be.

“And he called and said, you know, ‘I’d really like you to do this…We work well with one another. What do you think?’ It took several weeks to think about it but I finally called him back.” Becoming Tax Commissioner was simply the next step for Boughton.

Boughton is inheriting a department with 700 employees spread out across three offices, a new position that comes with different responsibilities and priorities. “There’s definitely anxiety and nervousness. I want to do a good job for the people [my department] serves…It’s oftentimes stressful. Nobody wants to pay taxes, but you have to…It’s a little bit of a learning curve, but I’ll get there.”

Residents of Danbury will miss this dedication and devotion that Boughton brought to his job of twenty years. Principal Dan Donovan has worked alongside the former mayor numerous times in the past and claimed that there were numerous fond memories with Boughton and impacts that Boughton had on him.

“I remember that during a National Honor Society induction, the Mayor and I started discussing the school budget…Before you know it, both of us missed our introductions. It was so funny,” Donovan recalled.

Donovan noted many of Boughton’s accomplishments, including keeping the crime and unemployment rate low, improving Downtown Danbury, and developing real estate. Boughton was committed to serving to the best of his ability until the very end, even securing the funding for a career academy – something that no other city or town in the state has – that will set a “legacy for the next 50 years in terms of how we prepare high school students for college and careers,” as Boughton claims.

Donovan also notes that “what you can’t overlook is that a Republican mayor was elected for ten terms in a Democratic city.”

Indeed, Boughton’s outstanding feat has sent a message of unity to citizens across the city. English Teacher Deb Stence, who taught American Studies with the former mayor for years, is “proud of his commitment to Danbury as a Republican. Still, it’s exciting to see this hometown celebrity move up to a state that is Democratically-controlled.”

In a time where binary political strife has been more prominent than ever, Boughton’s new position working alongside Democratic and Republican officials can hopefully send the right message of unity and cooperation to the state and the city he will always be a part of.