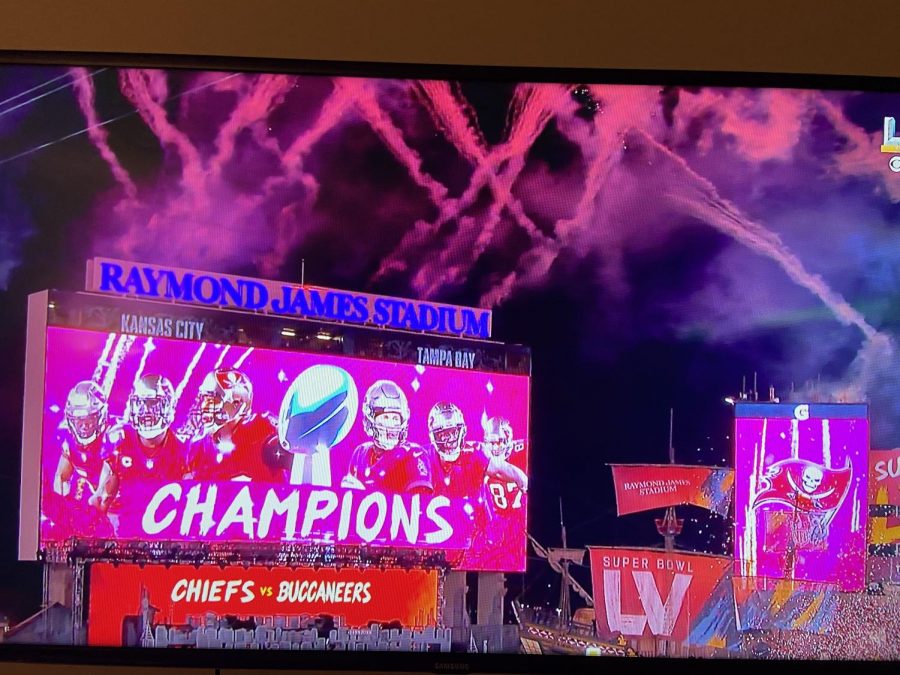 a photo captured of the Super Bowl LV broadcast on CBS

Super Bowl LV ended up as quite the one sided affair, in favor of Tampa Bay. Tom Brady captured his seventh Super Bowl title, and cemented himself as the most successful individual in NFL history. The Weekend’s halftime show sparked internet memes galore, and a streaker became the star of the fourth quarter.

The first quarter was relatively quiet offensively until Kansas City’s Harrison Butker opened the scoring with a 49 yard field goal. Tom Brady was quick to answer, throwing a deep pass which was caught by Antonio Brown. However, it was Gronkowski finding the endzone to put the Buccaneers up 7-3 to end the first quarter.

The Chiefs were not able to garner any offensive success to start off the second quarter, but Tom Brady wasted no time responding. Tampa’s offense trotted down the field quickly with help, from a long Mike Evans reception. However, Kansas City’s defense held Tampa to no points with a key fourth down goal line stop. Patrick Mahomes and Tyreek Hill were able to get the Chiefs away from their own goal line, but a 3rd down drop from Travis Kelce, resulted in another Chiefs punt.

Tom Brady quickly threw an interception, but it was overturned due to a Kansas City penalty. Kansas City then took an offsides penalty, allowing Tampa to get another second chance, which resulted in another Rob Gronkowski touchdown. Tampa led 14-3.

Kansas City was then able to achieve some offensive success, with 3 first down receptions from Travis Kelce. However, heavy pressure from the Tampa Bay defense, forced Andy Reid to settle for a field goal, only trimming the lead to 14-6.

Two Kansas City defensive pass interference calls allowed Tom Brady to drive his offense to the Kansas City one-yard line. Brady then threw a quick pass to Antonio Brown in the endzone, with six seconds remaining in the first half. Tampa would head to the locker room with a 21-6 lead over Kansas City.

Harrison Butker succeeded on his 52 yard field goal attempt to give Kansas City yet another field goal, making the score 21-9. However, Tampa Bay’s offense was quick to reply. Leonard Fournette took a handoff and converted it into a 27-yard touchdown run, to increase Tampa’s lead to 28-9. Mahomes was then intercepted by Antoine Winfield Jr., however Ryan Succop would have to enter play to split the uprights and grow the lead to 31-9.

The fourth quarter of Super Bowl LV provided no offensive points. However, Tampa Bay’s defense proved themselves as elite, with two red zone stops and an interception from Devin White. Tom Brady resided to kneeling the ball to run out the clock, and the Tampa Bay Buccaneers were crowned as Super Bowl champions.

Tom Brady was named Super Bowl MVP, however Tampa Bay’s defensive line recorded a Super Bowl record, 29 quarterback pressures, which was the main factor in the victory. Regardless of who garnered the biggest impact, Tampa Bay is now home to its very own Lombardi Trophy.