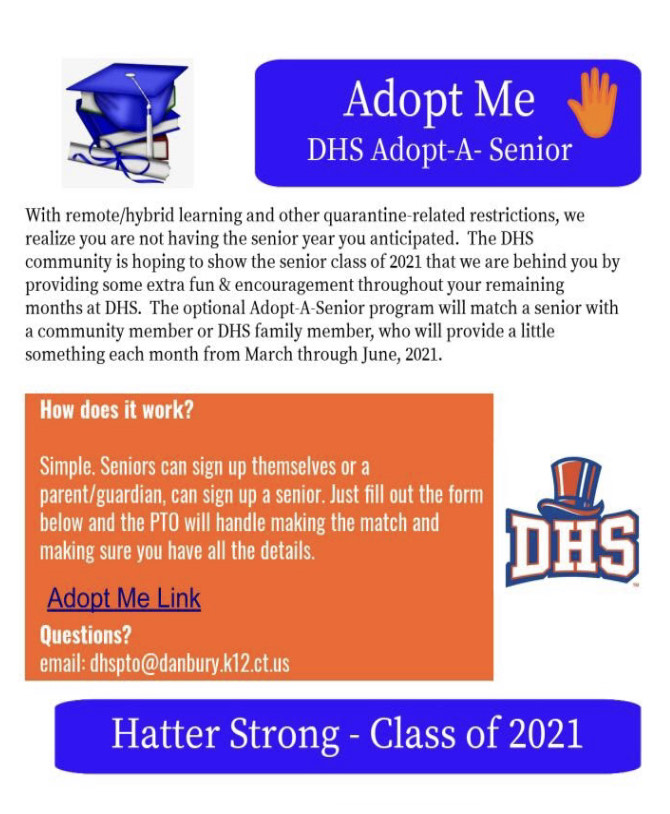 Senior year for the class of 2021 has not been what many students could have imagined. With a majority of the school year being done online, the festivities that many seniors had been looking forward to had been canceled due to COVID-19 restrictions. This has left many of them feeling upset and disappointed that their last year of high school has ended up this way. In an attempt to lift the spirits of the senior class, the DHS PTO has organized the Adopt-a-Senior event for students and parents to partake in.

The Adopt-a-Senior event is a way for the parents of DHS students to show appreciation to the class of 2021 for making it through such a difficult year by sending them gifts with some of their favorite things. A google form was sent out back in February for students to fill out, asking them questions such as their favorite foods, favorite stores, and restaurants, along with questions about some of their interests and hobbies in order to give parents an idea of what to give each senior. A form was also sent out to parents in order to find potential participants.

Two rounds of gifts have been given so far. the first round of gifts being given out in early March and the second round was given out this week. Many seniors, including myself, were very excited about what we had received so far. Some students received gift cards to stores and restaurants, others received beauty items like nail polish and nail kits, and some received an abundance of candy and other treats to enjoy. Overall this event so far has been a success.

At least one more round of gifts is predicted to be given out next month before graduation, however, this has yet to be confimred.

The Adopt-a-Senior event is definitely unlike anything we have seen in past years and parents, students, and teachers alike are very interested to see how the rest of this event goes, and if it is potentially something that can continue for the future senior classes.