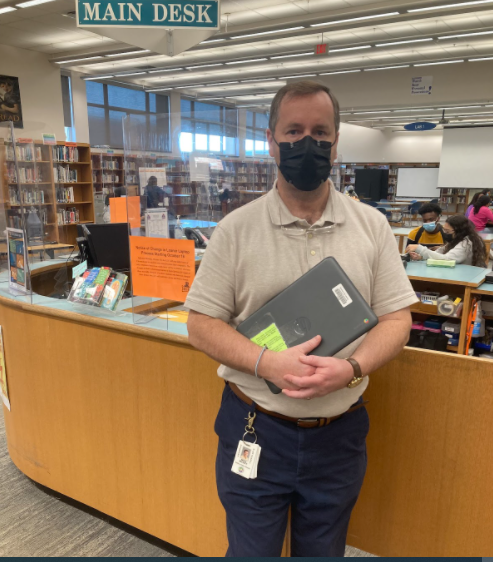 On October 18, 2021, the library and tech center at Danbury High School changed their policies about issuing devices to students. After over 50 students borrowed a device each day and more than half failed to return it to the tech center when the dismissal bell rang – sometimes even for multiple days – the LLC had no choice but to change the policy to only having students in need of their device being charged or having a technical issue fixed being allowed a temporary replacement computer.

According to Michael McNiff, a dedicated worker at the Library and Tech Center, issuing these devices “became part of [his] daily routine. Too many students were not returning the laptops at the end of the day or after a longer period of time, so they were running out. [The people at the LLC] consulted with Mr. Donovan, and the option was to make a change – since each student is issued a computer by the school. Now [they] would only loan computers out to students who have a technical problem with the computer or need it charged for the day.”

When asked if he was overwhelmed or stressed from giving out so many devices and not having the majority returned, he remarked that “No, it was not overly stressful, it became part of [his] daily routine.”

Another thing that some students have been confused by is that the new policy stated that they are no longer allowed to request new computers under the excuse they forgot theirs, but are allowed to request essentially the same thing under the excuse that their old computer is out of battery, with the library staff even being kind enough to charge their old computer for the time being.

Students borrowing computers from the library had either forgotten them or not charged them so that was why they had a loner program,” McNiff explained. “The problem happened when too many students were borrowing computers and not returning them, so [the LLC] were running out of computers. In order for the students to be responsible for the computers, the policy was changed.

“Now if a student needs their computer charged they will charge it and give the old one back at the end of the day. If they have a problem they can bring their computer to tech support, and if they can’t fix it immediately, they will give the student a ticket and a replacement computer for the day.”

This new policy is solely in place so the LLC does not run out of devices to hand out to students, as this has happened multiple times in the past. It is not to punish students who had accidentally forgotten their computer one day – it is to remind the students who constantly forget to return their issued devices back to the library.

Of course, this policy is not permanent, and potential changes might be made in the future depending on how the situation improves and at what rate, according to McNiff.

“[The number of students failing to return their devices] should decrease,” he said. “Can’t really predict how quickly this will happen.”