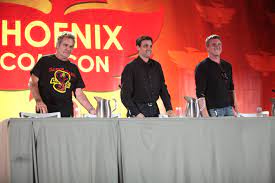 Netflix’s Cobra Kai released their 4th season this past December 31st. This season was full of twists and turns. We ended off season 3 with a large fight at the Larusso’s house and deal. The deal is if John Kreese(Cobra Kai) won the All valley Championship they would have Miyagi-Do & Eagle Fang shut down, but if Miyagi-Do combined with Eagle Fang win, Cobra Kai would. This left a lot of unselled events to play out in season 4, this season they also brought back a character from the Karate Kid movies, Terry Silver.

The main points and shockers of this new season took place at the all valley championship.  This was when Cobra Kai had to go against Cobra Kai. Those chosen to fight were Robby and Kenny.  Kenny is a middle schooler that was bullied, and due to that, he joined Cobra Kai. When he met Robby, Robby offered to teach him some karate. During the all valley championship when Robby is fighting him he tries to take it easy because he doesn’t want to hurt Kenny but with some conviceting from Kreese he turns on the mindset to win no matter the cost.

After the fight, Robby goes to check on Kenny and when he sees the way he was acting towards others he sees himself in him.  After this fight, Robby goes up against Hawk and ends up losing. This was a shock because Robby was determined and sure he would get the win for Cobra Kai.

In this boys all valley championship we saw an absence of Migual in the 2 half of the championship. He decides not to fight because he thinks he isn’t fighting for himself anymore.  If we then take a look at the girls competition we see Sam against Tory in the finals. Tory ends up winning the girls all valley championship but finds out Silver paid for the win. This takes a toll on Tory because for the first time she wanted to prove to herself  that she can win something big, but Sliver destroyed that for her. In the final episode Johnny drove down to Cobra Kai finding out that everything was gone and that they are moving to a new location. Robby follows Johnny and talks to him about how he has realized that everything he was doing was for the wrong reason and that things will never get better. Johnny then is there for Robby in a way he hasn’t done before, he tells him it will all be ok and that they will figure things out. When we see this heartwarming father and son moment that we haven’t seen with Robby and Johnny before.

Overall I think this season was a good season because we saw old and new friendships come in to play out in season 5. One of my favorite parts of the season is when Robby and Johnny have a father and son moment. This is because it is very unexpected and it opened up a lot of pathways for season 5 to take.