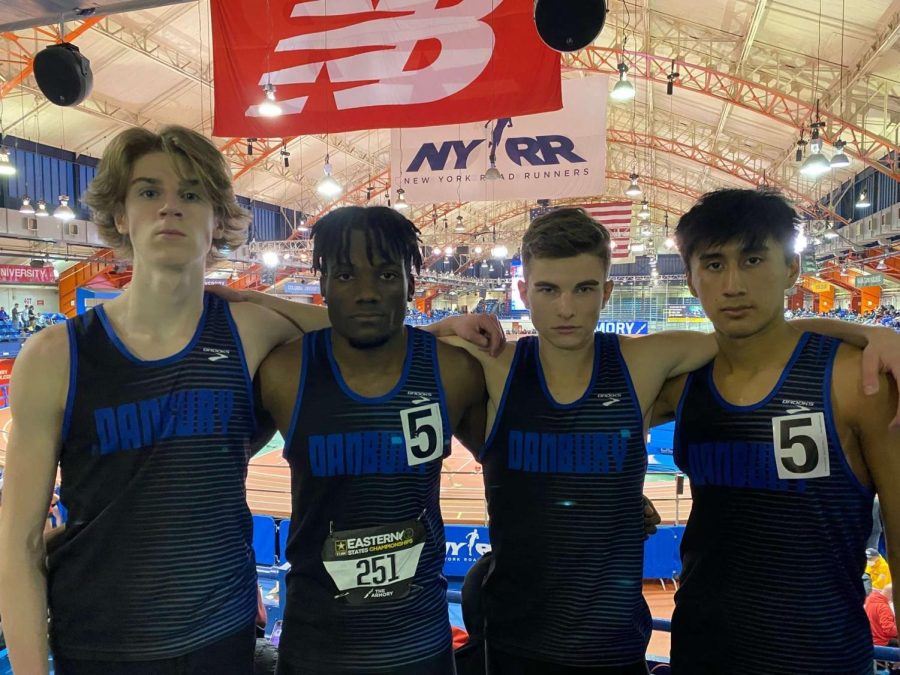 In this 2021-2022 indoor track season, both the boys’ and girls’ track teams racked up a number of accomplishments and medals. Both teams competed at numerous levels this season, including state and national championships.

For the third time in DHS history, the Danbury Girls won the State Open Indoor Track title. One influential contributor, Senior Alanna Smith, felt that through hard work, they were able to receive their biggest accomplishment of the season,

“Overall I think our biggest accomplishment this year was winning state opens. Since covid hit, all sports teams have had to deal with having smaller numbers, which meant that this year everyone had to work so much harder.” Smith also continued on to explain the big role the coaching staff played in their recent success: “Many of the top girls on the team had to deal with injuries this season, which definitely was very difficult for us. The coaches had to strategize and be very careful with them to ensure it wouldn’t get any worse. Thankfully everyone recovered and we were able to overcome those injuries and we were able to win the State Open title.”

Smith’s list of achievements continues as she became the 2022 New England Champion in the 55m and the 300m while breaking state records in the 55m, 60m, 200m, and 400m. She was also awarded the 2022 GameTimeCt State Runner of the Year.

Smith throws light on her objective going into this indoor track season, which was to give it her all: “I had such an insane outdoor season last year and I wanted to continue that into this indoor season. I had such high expectations for myself and the team, especially since it’s my senior year, I definitely wanted to leave everything out on the track.”

The Danbury boys also had a strong indoor track campaign as numerous individuals stood out, due to both their individual performances and performances with others. DHS had a relay group that consisted of Steven Confesor-Chable (Sr.), Christopher Twombly (Sr.), Devon Rozemark (Jr.), and Kyle Thomas (Sr.) who placed 2nd in the Eastern States.

Thomas felt that there was another accomplishment that stood out more than any medal they had won:

“Our biggest accomplishment this indoor season was coming together as a team and forming camaraderie/brotherhood. For us, this was worth more than any medals or trophies because this will carry over to the outdoor season where everyone will be ready to compete at the highest level.”

Thomas also explained how they had to overcome an unusual season, “This indoor season was by far the most abnormal season experienced by our team, especially the upperclassmen. Many of us had Covid setbacks if it wasn’t from getting the virus to not being able to run because of vaccination. We were able to overcome those factors and we ended up running at the conference level all the way up to the national level.”

Thomas received a 1st place medal in the 55m event at the Conference meet and was able to place 4th at States. However, these accomplishments did not come without sacrifice.

Thomas details his minor setback and how he was able to make a major comeback, “At the beginning of the season I came down with Covid which was a major setback for me. I was resilient and put in all the necessary work to get back to top shape.”

This indoor track season had many obstacles to overcome and many triumphs to celebrate. Now the boys’ and girls’ track teams will continue their form into the outdoor track season, where they both have their next meets on April 8th.