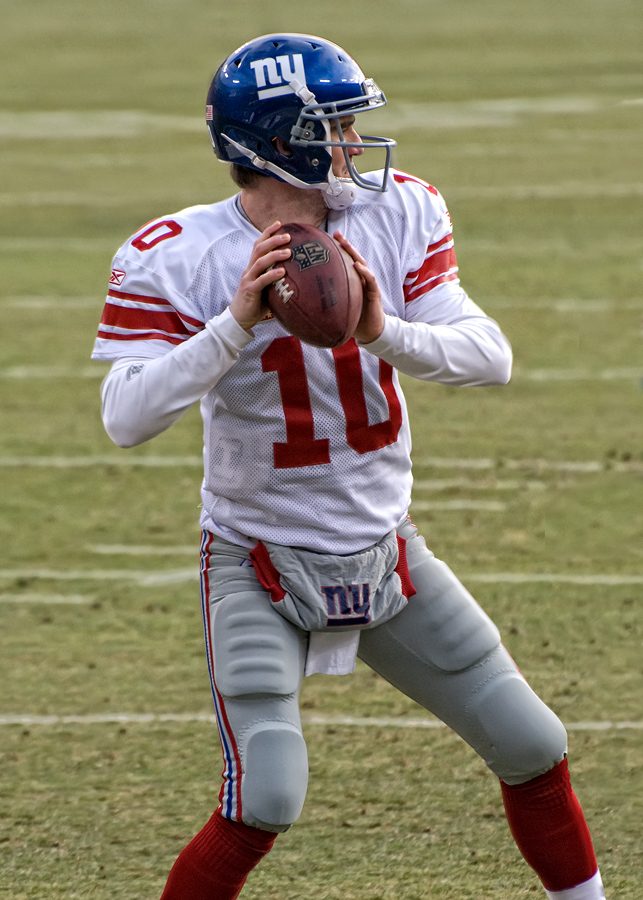 This past Tuesday, New York Giants head coach Ben McAdoo announced his plan to start Geno Smith at quarterback, ending quarterback Eli Manning’s 210 game start streak.  Manning’s 210 consecutive game start streak is 2nd all time, behind only Hall of Famer Brett Favre, who holds the record for consecutive game starts at 297 games.  The Giants decision to bench Manning comes after a rough 2-9 current season. The team has lost their top 4 wide receivers to injury and has, arguably, the worst offensive line in the league. On top of their nonexistent running game,  their defense is very inconsistent.

The team as a whole has had behavioral issues since the start of the year. Actions on the sideline and in the endzone have been inappropriate and players have walked off the field and out of the locker room. The team has no organization and no disciplinary actions have been taken to keep them together.  At times, certain players appear to give up in the middle of a play.

However, Manning shows up at every training session and every game with the mentality that he wants to win and wants the best for this team. He continues to play his game and never throws his coaches or his teammates under the bus; however, his coach has no problem throwing him under the bus. Week after week, in McAdoo’s post-game press conference, he repeatedly states, “Eli Manning needs to play better.” Although Eli may no longer be at the peak of his career,  he has no one protecting him, no one to hand off the ball to and no one to the catch the ball. Presently, the Giants have the most dropped passes in the National Football League.

In McAdoo’s delivery to the media, he specifically states, “We believe that Geno Smith will give us a better chance to win,” as well as mentioning that they want to “evaluate the quarterbacks.” Geno Smith was a former starting quarterback for the New York Jets, a team that never had a winning record with him as quarterback. In his career, he has thrown more interceptions than touchdowns. Smith is a typical NFL backup quarterback; however, he is not the future of the Giants, nor does he give the team a better chance to win than does Eli Manning. The Giants have a 3rd string rookie quarterback, David Webb, who the Giants have admitted is 4 years away from being ready. There is no reason to start Webb in an NFL game now, when there is plenty of time to evaluate him in the offseason. In fact, the Giants are likely to draft a quarterback, who will be their future, in the 1st round of the draft this coming year, as with their poor record they are ensured a high draft pick. Multiple experts criticized the Giants draft last year because of their choice of Webb in the 3rd round instead of picking up an offensive lineman, which the team  desperately needed.

Eli Manning is a 2-time Super Bowl champion and 2-time Super Bowl MVP for the New York Giants. He has lead two of the most improbable Super Bowl runs in NFL history. He beat the New England Patriots twice, in Super Bowl XLII, ending the Patriots’ perfect season, and in Super Bowl XLVI.  In both matchups, the Giants were the underdogs.  Eli will never be the most talented quarterback in the NFL, but when the game is on the line, in the most crucial of moments, there is no one else you rather have leading your team. He will win games, provided he has an adequate team surrounding him, as proven by his successes.

Manning provides more than just his skills on the field, he is considered one of the classiest players in sports. He shows respect to the players, coaches, referees and the media that surrounds him. He has continued to showcase his class and professionalism during this arduous week.  McAdoo offered Manning the option to start him to keep his streak alive. However, Manning denied the offer; because to him, the game streak is not about starting to only be benched, regardless of the score (as the Giants admitted that even if that the Giants were winning with Eli in, they were still going to pull him). To Eli, the streak is about starting him to compete, rather than starting him to keep the streak going, knowing he will be pulled, as that would diminish the significance of the streak and tarnish the record. Eli was even spotted Wednesday morning, in the cafeteria, before practice, mentoring David Webb. His selfless actions are among the reasons Eli was named Walter Payton Man of the Year in February of this year.

Former players, current players, sport analysts and fans from various teams announced their outrage over the situation on social media and on sports/radio shows. There have been multiple New York Giants fans who are still in dismay and have no intention of rooting for the Giants any time soon.

Manning is an older quarterback in the league and may not have many years left. Most fans weren’t opposed of releasing/ trading him at the end of the season to a team that is Super Bowl-ready. The Giants needed to let him play these last 5 games, because he has earned the right to play for this team. On top of that, their announcement was disorganized and disrespectful to Manning’s career, considering all he has done for the organization.  The quarterback position is not the reason the Giants aren’t winning, as without significant roster and management changes, no quarterback will win with Giants.

Manning deserves to be recognized these next 5 weeks, which are likely to be his last with the team. His career and moments here will not be forgotten by players, fans and analysts. It’s appropriate to let him move on after this season, but his end in New York should not have happened like this. The Giants were once considered to be one of the classiest sports organizations, but after this decision by John Mara, Jerry Reese and Ben McAdoo it has become clear it is not. This organization needs to clean house, including managers, staff and players.

When Manning is most likely let go at the end of the season, it is likely he will end up in Denver or Jacksonville. These two teams are a quarterback away from winning a Super Bowl. The majority of people will be rooting for Manning to win that Super Bowl to prove the Giants wrong about their decision and let Eli have a proper ending to his amazing career.