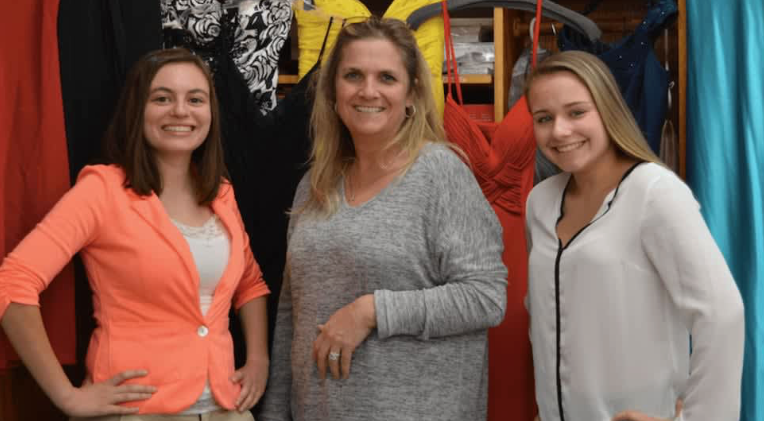 DHS alumna Alasandra Primavera, right, posted this photo of her, fellow student Sarina Gersten, and teacher Susan Schullery on Schullery's Gofundme.com page. Primavera is one of many current and former students who have reached out to Schullery after she was diagnosed with cancer.

Updated at 10:38 p.m. Monday, Feb. 11: Business teacher Susan Schullery is reportedly doing well after undergoing surgery to remove a rare form of cancer, according to family friend, Cheryl Duva. It was reported today on Schullery’s gofundme.com page that the surgery was performed today. This is Duva’s update: “Hello to all of you amazing caring people who joined together to help make Susan’s life-saving operation a reality. I am very happy to report that her surgery ‘went better than the doctor expected’ and he is confident that most (if not all) of the cancer has been removed. She will continue her chemo treatments and recovery will take some time. For now, time to do cartwheels in the streets my friends. On behalf of the Schullery family (and me) THANK YOU for your kindness and generosity!”

Students and staff have been abundant in their outpouring of love and support for Business and Peer Leadership teacher, Susan Schullery. In September, Schullery was diagnosed with stage four cancer after months of thinking that she was well and healthy.

Often, cancer can be difficult to identify and recognize. In Schullery’s case, “We don’t know what it is. It is unknown,” she explained.

Thus far, Schullery is being treated with general chemotherapy in hopes of keeping cancer cells from spreading, and to make her eligible for the procedure that she needs. It will only be after “four doses of chemo,” “four additional doses of chemo,” and a one-month break that Schullery will hopefully become a strong candidate for surgery.

Plans for the future regarding surgery, however, have been hard to make. “It’s like the stock market,” Schullery shared. “Once it goes down,” she will be qualified for surgery. However, once it “starts to tip up” again, she will no longer be eligible.

Cheryl Duva, a close friend of Schullery, started a GoFundMe in hopes of raising money to help with the extreme financial expenses. “I wasn’t aware that she had started it,” said Schullery. It was in the middle of the school day, when her phone began to go off and “one seat to the next seat, students were telling each other” about it, that she found out.

Initially, Schullery was hesitant to make a video asking for help on the GoFundMe. Fortunately, Duva convinced her, explaining that “I know it’s gonna be hard but I need you to put a video together.”

Since the GoFundMe was posted, the campaign has skyrocketed. In just a few days, the campaign has become the talk of the town and has even become trending on the official GoFundMe website. It has also raised more than her original goal of $25,000, now exceeding $52,600.

Schullery said that she “cannot put words together to describe the compassion” she has been receiving and is shocked by the amount of old friends that she has seen for the first time in years.

WestConn freshman Hayden Turk was one of several former students who visited with Schullery last week. She expressed her gratitude towards Schullery and the times that they have shared. “I had a difficult time but she was always there to assure me,” said Turk. She continued by sharing how she struggled dealing with college and high school at the same time during her senior year but Schullery “was always able to comfort [her].” 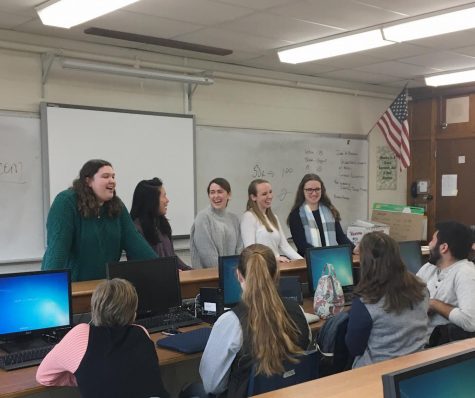 In addition to Turk, a few other former students were excited to share their love for their teacher. “She was always so much more to me than just a teacher,” expressed UConn student Nikki Ho.

Fairfield University student Caroline Magyar also shared how grateful she will forever be for having Schullery in her life. “She has done so much for me and we are better people now because of her,” said Maygar.

TeAva Mercado, a 2017 graduate, also spoke highly of her teacher/”inspiration” and had many kind things to say. The former student said that Schullery’s “selflessness and kindness” is what she truly loved most about her in high school. “She always took time out of her own day to help her students and she believed in every single one of us so why would we not fight for her,” Mercado said.

Mercado went on to share a few of her favorite moments that she has had with Schullery. She will always remember the time in her senior year when Schullery had her class do a community change project.

“Everyone had gotten partners except for me,” Mercado said, “but then I realized that she wanted me to do it all alone” and “she only did it to me because she believed in me so much.” The former student was then quick to say that “there was not just one special story or memory with Mrs. Schullery because everyday was a new one.”

Jay Danzy, another 2017 graduate, agreed that it was Schullery’s selflessness and kindness that impacted him so much. Danzy was lucky enough to have Schullery as “a great mentor” for “all four years” of his high school career and has learned many valuable lessons from her.

One influential memory of Schullery that Danzy will always remember is a time during his junior year in personal finance class. “She told us to always say ‘yes’ because whenever there is one opportunity, it always leads to another door that is opened,” Danzy said.

A current DHS Senior, Leah Dolan has also appreciated how Schullery “never failed to be there for [her] whenever [she] needed her help” and is immensely grateful for how Schullery “helped [her] become more outgoing” throughout her high school years and get her to “personally reach out to people that [she] doesn’t know”.

Dolan was also overjoyed to hear about Schullery’s big news involving the success of her GoFundMe campaign saying, “I remember checking the GoFundMe every hour [after hearing the news] and when [the campaign] reached the [initial] $10,000 goal, I thought that was absolutely insane and then I saw it reach $25,000 and I was shocked.”

Along with the rest of the Danbury community, Dolan is “extremely happy for [Schullery] and glad that she is now able to pay for the surgery that she needs and has so many supporters in her life.”

Not only are students from past generations immensely grateful for the time they have spent with Schullery, but she is as well. When asked from others about why she continues to attend work and get out of bed every day even when she is unwell, Schullery responds by telling them, “This is my life, this is me living” and “to not be here is telling me to stop living my life.”

Having her entire life revolving around students and work (outside of her home life), has made Schullery more hopeful. With the support that she has been receiving from all those she has touched coming from her workplace in general has shown Schullery that “[her students] listened, they got it,” and that her work has truly been recognized.

Not only have students come to lend a helping hand to Schullery over the past few weeks, but so have many of her colleagues.

One of her closest colleagues and English teacher, Tom Porcelli has been impressed with the way Schullery has continued to attend work as regularly as she can and has expressed how she is “a very strong person” and is impressed by how Schullery has managed to “appear normal” and let nothing phase her or stand in her way.

Another close colleague of Schullery’s, Business teacher Diane Mohs has also commented, saying that “Cancer is difficult for anyone and [she] can’t imagine what Mrs. Schullery is going through.” However, she does “admire her for her strength and perseverance in her resolve to get well” and strives to “support her and her family at this difficult time.”

Hundreds of donations have been made to the GoFundMe campaign that has been posted in hopes to make Schullery’s expenses much easier to deal with. Donations have been made for hundreds of dollars. However, Schullery says that “students [simply] donating 5 and 20 dollars is still so touching” and she would like to highlight the fact that “the expenses are [indeed] astronomical but the need for treatment begins at $25,000 and if wasn’t for all the support this surgery would not even be a consideration”.